Box Analysis is the thirteenth episode of TribeTwelve, and the 13th video of season 1. It was uploaded on September 16th, 2010.

I don't know what to do about all this...I am very afraid.

Noah: Hey, it's Noah. It's been a while. Sorry about the long wait. My classes have just been catching up with me and I've been really behind in my work. I just had to postpone this video for my sanity's sake. So, I tried my best to analyze the contents of the box that was left outside my door. And this was the crumpled card that was inside. It says...

[The index card appears on-screen with Noah's voice reading it.]

Noah: "THE TRUTH LIES WITHIN. THE RIVER'S FLOW IS WHERE IT BEGINS." and "WHEN THE DAWN BREAKS, THE SOUL AWAKENS."

Noah: I don't know what it means. I tried Googling it and I got no results. It just makes no sense. And on the back is... Yeah.

[The back of the card is shown, reading "NOAH" in large letters, with an Operator symbol. The screen cuts to black.]

Noah: I went to a tech specialist about the electronic parts. He told me...

[Cut to a table, where all of the electronic parts are neatly lined up.]

Noah: ...that they all belong to various devices, including a VCR, a television, and a video camera.

Noah: Then I went to a phone shop to try and extract any information off the cell phone.

[Cut back to the table with the electronic parts. Noah holds the phone in front of the camera, as it appears to be going through a startup sequence. The screen is corrupted and nothing can be identified. He presses buttons and the phone appears to be scrolling through photos.]

Noah: The clerk couldn't repair the screen, so he got a similar model phone with the same user interface and used it as a reference to access and transfer the phone's data onto a mini SD card. He tried to get the phone's number and other identification info but he said that it was corrupted or something and it was unretrievable. But, he was, however, able to retrieve a few dozen pictures and three audio files.


[View of the audio waveform of Audio Clip #1. The clip begins playing a high-pitched noise, raising and lowering in pitch.]

[View of the audio waveform of Audio Clip #2. The clip begins playing what sounds like an outdoors area, with crickets in the background. The sound of someone crying can be heard, which is interrupted by a loud scream. The rest of the video has slight audio feedback, like someone tapped on a microphone.]

[View of the audio waveform of Audio Clip #3. The clip begins playing what sounds like be Noah laughing maniacally. A buzzing noise begins to play, interrupting the laughing for several seconds. The rest of the clip is the Noah's maniacal laughter.]

[A picture of someone drawing something.]

[A picture looking down off of a balcony somewhere. The photographer is very high up.]

[A picture of an exit sign on the ceiling in a building.]

[A picture of someone's feet, with their hand getting into the shot.]

[A picture of various sausages and meats at a grocery store.]

[A picture of a forest, with a large field in front of it.]

[A picture inside a forest, on a path.]

[A picture of a hallway in a hotel. A figure, presumably the Administrator, can be seen far at the end of the hallway.]

[A picture of a tray of curly fries, while someone on the other side of the table eats. The left side of the picture is distorted.]

[A picture of an intersection at a stoplight.]

[A picture of the outside of a clothing store, seen from a car. Various faceless mannequins can be seen, including one that looks very similar to the Administrator.]

[A picture of a bookshelf. The books include "Stolen Lives", "Wings of Destiny", "Trio", "Easter Lilly", "His Little Women", and "True Evil".]

[A picture of the back of a minivan/car.]

[A picture of two deer, grazing.

[A picture from inside a forest.]

[A picture from a forest clearing. A tower can be seen near the edge of the forest.]

[A picture from inside a forest. Another small observation tower can be seen.]

[A picture of a squirrel hanging onto a tree.]

[A picture that appears to be of someone's finger blocking the camera. Some distortion to the left.]

[A picture of another forest clearing, with the Administrator standing in the background. His tentacles can be seen, and the left side of the picture is distorted.]

[A picture of a hallway in a building, outside a bathroom. Of note is a tall stick figure.]

[A picture of a graduation ceremony. The left side of the picture is distorted and the Administrator is standing up in a boxed area above the bleachers, his tentacles slightly visible.]

[A picture of some fireworks.]

[A picture of a foggy road at night.]

[A picture of a building, possibly a hospital.]

[A picture of a teenage boy, extremely distorted. The left 3/4 of the picture is blurred.]

[A picture of a person's arm, holding a bottle of water.]

[A picture of what appears to be a dark alley.]

[A picture of a hand holding a red substance, possibly blood from coughing.]

[A blurred picture. Nothing can be seen.]

[A blurred picture of what appears to be the Administrator. His face is red, instead of pale white.]

[Another blurred picture of the Administrator.]

[Another blurred picture of the Administrator.]

[A blurred picture. Nothing can be seen.]

[Another blurred picture. It's difficult to discern what's in it.]

[A blurred picture of Noah's face. Noah is smiling, but in a way that seems to suggest that could be Firebrand, Noah's vessel.]

Noah: And then, we have the tape.

[Cut to the table with the electronics. Noah holds the tape in front of the camera, moving it around.]

Noah: It took me several hours to untangle and rewind the film back into its cassette. I wanted to be careful. I didn't want to damage it. And, luckily for me, it was all in one piece. I put it back into my camera and I played the whole thing.

[The video from the tape starts playing, with static only.]

Noah: Most of the tape was too badly damaged to be captured, but at one point near the end, I managed to recover some footage.

[The tape starts playing. A blue screen with a Play icon in the corner appears.]

[Most of the video is dark and distorted with static. It appears to involve Noah running around Victor Park at night. Noah walks around a playground. Noah appears to encounter the Administrator and, at the end, Kevin/Observer appears. As the video ends, a frame with a picture of the Administrator standing next to a young boy can be seen.]

Noah: To me, that playground looks identical to the one at Victor Park, but I've seen others like it in similar parks around different states, so I'm not gonna jump to conclusions, but just judging from what I can make out, I can see that man again. And I just don't know what to make of it at this point.

[Cut to the table with the electronics. Noah holds the key in front of the camera.]

Noah: Then, on a hunch, I tested the key out on the doors in my house. It opens my garage door. Now, I don't know if my parents made copies of my house keys and I really don't know how this person got a hold of one, but I called a locksmith and I'm getting my locks changed. I don't know if whoever left me this was trying to send me a message, or scare me or something. I don't know what the message is. The audio and the photos I got from the phone are creepy enough. And the tape. I know it sounds crazy, but I have a feeling that Milo must have had something to do with this.

[The audio becomes louder and the video becomes slightly distorted.]

Noah: His mom won't answer my calls and I don't know what to do, but if any clues pop up, I'll post an update. Until then, Noah Maxwell signing out.

[As Noah grabs his camera, the video begins to stutter at a high speed, getting darker until fading to black. Strange noises similar to the audio clips can be heard.

[A faint black and white image appears at the last frame of the video. It appears to be someone's face. It have the text: "FORGIVE ME".]

The photo of the Administrator in the forest

The graduation ceremony photo. The Administrator is in the very top-center

One of three blurry Administrator's photos

The photo of a hallway in a hotel. Far at the end is the Administrator

The infrared image of the Administrator from the tape footage

The photo of the Administrator standing with a young Milo, that would later reappear in "The Envelope"

Kevin/Observer appears on the end of the video.

A hidden image from the last frame of the video 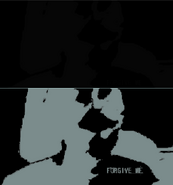 The hidden image from the last second of video; bottom version with altered brightness contrast to show "FORGIVE ME"
Community content is available under CC-BY-SA unless otherwise noted.
Advertisement