Bridge to Nowhere is the fourty-seventh episode of TribeTwelve, and the 7th video of season 2. It was uploaded on February 14th, 2014.

This video is the second half of a two-part series. The first part is titled "Severance".

Here is the rest of the footage I took on December 24th, part 2 of 2. Nothing makes sense anymore, but then again, did it ever?

[Video starts on Noah's iPhone screen, showing the date and time to be 9:22 on Sunday, September 29.]

Noah: What the fuck is going on here?

[Cut to Noah walking along a pavement. He sees a car with its interior light on and a passenger inside it and runs to it. The passenger is Lee from WhisperedFaith.]

[Noah knocks on the window and the driver winds it down.]

Lee: Yeah—yeah, can I help you?

Lee: You don't know where you are?

Noah: No, heh, I don't know where I am. Where is this place?

[Noah turns and jogs away from the car.]

[Cut to the parking lot of a gas station. Note: It is speculated that the individual standing out front is Chris from Dark Harvest. Noah enters the store and goes into the men's room. He turns and is confronted with the open air of outside, and as he turns back around, it seems that he's in a small dilapidated brick building. He backs out of the building onto a sidewalk.]

Noah: What the fuck? [He pans around.] Where am I?

[He runs down the sidewalk.]

Noah: Where the fuck am I? Holy shit!

Noah: Alright. Alright! Whatever you say.

[He comes to a black door and pans side to side as though paranoid. He knocks on the door.]

Noah: Is anybody there? [He tries the handle and knocks again, faster.] Anybody!

[Cut to Noah walking around again.]

Noah: This place. There's something about it. It just... It just doesn't feel right. Feels...doesn't feel natural.

[Cut to what vaguely appears to be a laundromat. Intense music is playing. Cut to back outside.]

Noah: This place is fucking weird. [He mutters something unintelligible.]

[He pans quickly behind him.]

[Cut to Noah in the same building as the "laundromat"). He sees a drinking fountain and runs over to it to drink. As he bends and points the camera behind him, a figure—presumably HABIT—quickly peeks around the corner behind him. Noah stops drinking water and coughs blood into the sink. Noah pans around to show that he has a nosebleed. He washes the blood off his fingers, still coughing and wheezing. Cut to outside; Noah zooms in on a window of a building, and back out again. Cut to inside again, Noah sees a staircase and begins to climb it. He reaches the top and turns, and instead of a landing and door, is faced with a street outside.]

Noah: What the fuck?

[Breathing heavily, he climbs to the next level, is faced with the same street, and laughs.]

[He runs to the next level and it happens again.]

[Cut to Noah's feet as he sits down on the stairs, apparently sobbing. The footage intersects with and cuts to footage of bugs crawling in a line on the landing of the staircase.]

[Back to Noah sitting on the stairs; it is looped footage of him rocking the camera back and forth and maniacally tapping his finger on his knee.]

[He mutters something else unintelligible. It cuts to him panning around while inside.]

Noah: I'm going around in circles!

[Cut to Noah walking beside a playground, filming through the bars around it. As Noah pans past them, HABIT briefly appears between two bars; he unfolds his arms and begins to open his mouth, then disappears. Noah jumps back, startled, then pans around to see HABIT behind him. He runs. Video cuts to Noah walking down a street.]

[Cut to Noah zoomed in on a bridge at the far side of a parking lot.]

[Noah walking down a paved path.]

Noah: Just a crazy, fucked-up dream. Gonna wake up any second. It's how it always is, right? Your mind's a shithole--

[Noah pans around behind him to reveal Jeffrey from EverymanHYBRID. He appears very uneasy and hurried, and frequently glances around.]

Jeff: You can not listen to what any of them try to tell you.

[Jeff glances behind himself.]

Jeff: I know this doesn't make sense, I know this must be (?) very confusing, but... you're not gonna win this.

Jeff: I know this doesn't make sense— [He looks behind himself again.]

Noah: What the fuck, Jeff?

Jeff: You can't be— you're not gonna be the hero of this.

Noah: You're not making any sense—

Jeff: If you wanna help anybody, that's all you can do. You gotta kill yourself. It's... it's just the only solution—

Jeff: And just stop filming this shit, and... kill yourself. Alright, I know things are confusing right now, man, but you gotta listen. You can't listen to them, alright? Trust me.

Noah: What the fuck, Jeff?

[Jeff seems to see something in the distance to his right, behind Noah. He begins to edge away, then runs away past Noah, off the far end of the bridge.]

Jeff: [while running] Just don't listen to them!

[He lowers the camera so it points behind him to reveal HABIT sitting, relaxed, at the start of the bridge. Behind HABIT, the entrance of the bridge seems to reveal parkland in daylight. HABIT slowly gets up and walks towards Noah with open arms.]

Noah: [mutters] How are you alive? [whispers] This doesn't make any sense...

Noah: Fuck this. [He starts to run towards the other end of the bridge.] No. No!

HABIT: [distant] Where you goin'?

[He reaches the end of the bridge and swings the camera around, to see HABIT standing, posed proudly, right behind him. He pans down to show that HABIT has him by the arm.]

HABIT: Really? [Noah struggles] Come 'ere! [HABIT leads Noah back to the middle of the bridge by the arm.] Yeah, let's run from him in his own house.

Noah: Get the fuck away from me.

[HABIT sits down on a chair against the railing and puts Noah next to him. HABIT sighs.]

HABIT: Noah. [He looks around as if looking for someone. Speaking in his demonic "true voice"] I don't remember letting you in. How did you get here?

HABIT: [looking around, stretching his jaw] Yeah, yeah, well, things are a little bit... different... here... [He clears his throat] So, what he said to you, 'bout all that...

[He makes a throat-cutting gesture]

HABIT: ...dirty business. Killing yourself. What do you think?

Noah: I...I don't know what to believe at this point.

[HABIT jumps up and grabs Noah by the front of his shirt. Noah holds the camera at arm's length so both are in frame.]

HABIT: So what, you're just gonna kill yourself? Is that the option that you have, is that a legitimate choice? That shit isn't even on the fuckin' register, do you understand me? [pause] Noo, you won't do it. I can smell it on you. You know why? Bec—

[Noah looks down at the camera and HABIT sees it.]

HABIT: Are you filmin'?

HABIT [less demonic]: Let's compose ourselves! For God's sakes, man, we're on camera! We have to look good, we have to look proper.

HABIT: Noah, you only really got one choice, and that is to fight; and that is to trust me. Hell, I may not be the greatest guy, but I'm not asking you to put a gun to your head and pull the trigger, am I?

Noah: How the fuck can I trust you anyway?

HABIT [demonic]: Listen, Mister Fighter. [He smiles] You can't. You can only trust yourself. See? That's why I'm not doing it for you. Did I ask you to give anything to me? Am I holding a gun? No. I gave things to you. You said it yourself, man: I mean, it's only a matter of time till you're dead. Might as well fight while you can, right?

[He puts Noah down.]

HABIT: Noah, you're gonna fight. Because I told you to fight. Look at you, you're shaking. [He chuckles] You don't have the cojones to kill yourself. Just—

Noah: Fuck you! Fuck you and all you stand for, you cocksucker!

Noah: I feel better. I derive pleasure from that.

HABIT: [nodding] A reprieve. From a stagnant, unchanging sorrow and pain. [Less demonic] I can understand that. But I can't respect it. Noah, I want you to look at me and I want you to tell me that you're going to do what I asked you to.

HABIT: You're lying. You're gonna find that journal. You're gonna draw that symbol on what you need to do it on. Not because I asked you to, no. Because you want to. See? I'm in it for your benefit. Now, you're gonna go do what I asked— sorry, do what you wanna do, of course. And I'm gonna go back to hunting down that little rascal...

HABIT: Go home? I can do that.

[HABIT kicks Noah, who falls back, coughing, into the bedroom of his own house.]

[HABIT preforms an air jerk. He shuts the door through which he kicked Noah and the distortion ceases.]

[Noah gets up and opens the same door, to reveal his bathroom.]

[Noah lethargically walks to his bed and collapses onto it. The last frame of the video is an image of HABIT, smiling and holding a pile of eyes with the words, "I ONLY HAVE EYES FOR YOU".]

HABIT in the last frame of the video.

(6:49) HABIT between the playground bars. 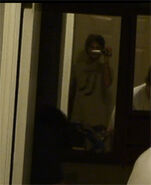 A screenshot of an unused shot from this video.
Community content is available under CC-BY-SA unless otherwise noted.
Advertisement