Karl Maxwell (born July 16th, 1924) is Noah Maxwell's grandfather, whom Noah visits on his trip to Milo's Funeral in New York. In "Northern Trip Footage", Noah once again arrives at Karl's house. Karl does not answer the door when Noah knocks, but responds by telling Noah in German to go away and that it was not the right time.

According to the video My Grandfather Karl, Karl was born in Germany and lived near the town of Vöhrenbach, near the Black Forest. In 1944, he was a member of the Office of Strategic Services of the US Army. Karl was sent on an operation near where he grew up. He and his group were disguised as civilians and sent to meet an informant who would give Nazi blueprints to the Allies. On the way there, they encountered an injured Nazi soldier that was running from something. They encountered a creature that Karl refers to as "Der Großmann". It looked like a tall man with no face and tentacle arms, wearing a black suit. He tried to talk to it in German, French, and Russian, but received no response. Karl and his group shot at the creature, but it didn't get damaged. It grabbed the Nazi soldier and started pulling him into the air. The creature and the soldier then disappeared without a trace. Karl then told Noah that he was in grave danger and needed to avoid the tall man as much as possible.

According to the Observer, Karl is in possession of a journal written by a man named Sebastian (now deceased) during the course of a major event not documented by historians, and contains forbidden knowledge relating to the Administrator and the Collective. According to the Observer on Noah's hijacked Formspring page, his journal prevents the Collective from directly interfering with him.

On Noah's ask.fm account, when he was asked whether anything "weird" happened to him as a child, he said that he had been in a boat with Karl, his grandmother Sonia Maxwell, and his mom, and the boat capsized. His grandmother drowned, and Karl looked for a book instead of trying to save his grandma. After this, according to Noah, Karl became a recluse and his parents stopped talking to him. Noah suspects the book to be the journal.

Karl was almost certainly confirmed to be Persolus in DEATHTRAPEXODUS. 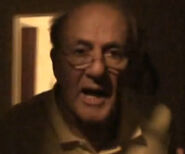 Karl Maxwell in "My Grandfather Karl"

Sebastian's Journal, which is in Karl's possession

Persolus, an entity of the Collective and most likely Karl Maxwell
Community content is available under CC-BY-SA unless otherwise noted.
Advertisement