Noah Maxwell (born November 11, 1991) is the protagonist of TribeTwelve. Noah created the TribeTwelve YouTube account as part of a project on the Twelve Tribes of Israel for his Religious Studies class before his teacher cancelled the project. He lives in Florida.

Because his video project was cancelled, he converted the leftover YouTube page into a memorial for his cousin, Milo Asher, after he committed suicide on May 28, 2010. Noah uploaded the only video that he had of Milo as "submissions" from a tape when they had last seen each other one weekend that same month. After viewing the videos on the tape, Noah realized that a strange man appears in the videos. Noah also starts being monitored and attacked by a strange entity known as the Observer. The Observer and other members of a mysterious hive mind of beings, known as the Collective, are all shown to have some mysterious, yet important influence in Noah's life.

Firebrand is a member of the Collective that seems to be trying to help Noah, but it has not been made clear how much control he has of his own body, given that he is possibly being used by the tall man, known as the Administrator. Firebrand's identity has been revealed as of "The Live Stream Incident" to be Noah, from either the future or an alternate timeline. It was revealed in "DEUS EX MACHINA" that Firebrand was no longer part of the Collective, and that he was saved by a "loathsome entity with mutual interests". How this Noah from another dimension/future became Firebrand's vessel, it remains unknown.

Sisyphus Future Noah is a Noah from the future where Noah was enslaved by the Collective and forced to live within their realm for an undetermined amount of time.

Prolonged exposure to the Collective's influence seems to have permanently changed Future Noah for good, as his personality is drastically different from the current Noah's, and he also has ownership of several items that the current Noah has yet to find such as Sebastian's Journal and a Nazi Blade.

Rendezvous Future Noah is another Noah from the future, albeit a future not as far off as the Sisyphus Future Noah.

Noah and Milo's journal in "Fortunes"

Noah in the Collective's realm, as shown in "COMECLOSER" 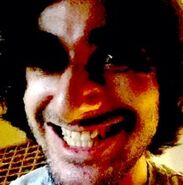 Noah with Sarah during Thanksgiving

Noah getting controlled by the Collective 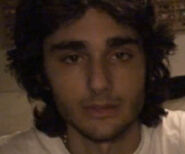 Noah having a nosebleed

Noah as Firebrand in "HAPPYBIRTHDAY"

Noah/Firebrand thanks your past self in "The Live Stream Incident"

Noah/Firebrand's Palm with an Eye in "DEUS EX MACHINA"

Noah/Firebrand in front of burning building in "DEUS EX MACHINA"

Noah/Firebrand flipping off the Administrator in "DEUS EX MACHINA"

Noah/Firebrand in entrance of Boardwalk in "DEUS EX MACHINA" 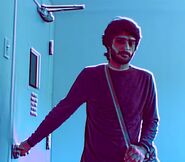 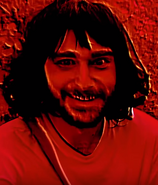 Noah/Firebrand in edit shot of Vine in "Fortunes"

Noah/Firebrand in picnic table in hidden frame of "Fortunes"

The Tower's shadow, with Noah/Firebrand on second story in hidden frames of "Fortunes"

Noah/Firebrand holding the journal in frames of "Fortunes"

Sisyphus Future Noah in the end of "DEATHTRAPEXODUS"