Submission #4 is the fourth submission video, the fifth episode of TribeTwelve and the 5th video of season 1. It was uploaded on June 9th, 2010.

I should have kept in touch with Milo.

We went back to Victor Park.

This time, we walked along the park's nature trail.

Noah: -the playground there.

Noah: They built it after some kid died. I think the mom petitioned for it in May, and they got it built.

Milo: Is that the tower you've been telling me about?

[Camera zooms in on the observation tower.]

Noah: -er. You can look at the sights and stuff. It's a neat place, wanna go there?

Noah: Alright. It's back this way.

Text: The audio from the next part of the footage was highly distorted. It finally corrected itself after about five minutes.

Milo: Something happen over here?

[Footage cuts to Milo holding the camera while sitting at a picnic table.]

[Footage cuts to Noah and Milo walking along a trail.]

[Visual tearing can be seen.]

[Milo pans the camera over to the right. The Administrator can be seen on the hill. Milo runs.]

Text: After I caught up with Milo, he said he wanted to leave immediately and head home.

I had never seen him so afraid before.

Back then, I didn't think anything of the way Milo was acting.

But now, as I view this footage, I feel really bad that I didn't keep in contact with him. 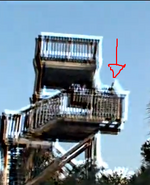 The Administrator's appearance during the distortion at 1:23 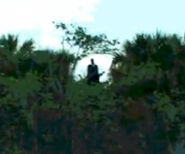 The Administrator's appearance at 2:46
Community content is available under CC-BY-SA unless otherwise noted.
Advertisement