The Envelope is the twenty-fourth episode of TribeTwelve, and the 24th video of season 1. It was uploaded on June 17th, 2011, together with "Summer Update" and "Secret Parent Interview".

This is the envelope I received in the mail. The contents are Milo related. I think it's starting again.

Here's the unburnt version of that letter: http://www.mediafire.com/view/?58qlg87uz7ym0rp

[The video opens on Noah's face.]

Noah: [Sighs.] It's Noah. Sixteenth of June. Another update.

[He holds up an envelope with purple duct tape forming an X on it.]

Noah: Got this envelope in the mail today. No return address. Just...just this big purple X made up of duct tape on the front. At the bottom here...

[He holds the bottom edge in front of the camera. The camera focuses on the penciled-in words "ASHES ASHES".]

Noah: "Ashes ashes." Another on the flap at the top...

[He lowers the flap into view. The words "WE ALL FALL DOWN" are penciled in.]

[He lays the envelope down and pauses.]

Noah: ...Four strange things in this envelope. Each...each being more mysterious than the last, we'll leave it at that. [Sighs.] First of all, we have this.

[Noah holds up a photo of the Administrator next to a kid from the video in "Box Analysis".]

Noah: It's - it's like a postcard or something. Like...on the front it's...like a glossy photo of a shot from-- it's taken from the tape that I recovered in the Box Analysis video. This is the top.

[He points to words in the top right of the photo.]

[He flips the photo around and the white surface has words penciled in.]

Noah: "Not an Observer. Just an old connection. Yours."

[Noah lays the photo down.]

Noah: There's no signature. Second...at the bottom. Crumpled up. I found this badly burned piece of paper with text on it.

[He shows the burnt letter.]

[He shows the top of the paper, pointing to the date.]

Noah: And that it mentions Milo.

[Noah points to a line saying, "He greeted himself at Milo." He then puts it down with a sigh.]

[Holds up picture of a woman, man, and boy standing in under a tree, their faces blacked out]

Noah: It's also dated from '95. You can see three people standing together here...in the middle of the shot. Their face... faces scribbled out. Like, sharpie, or something. The bottom-- it's kinda hard to read 'cause it's faded, but--

[He puts the photo down.]

Noah: I'm just presuming it's one of Milo's many psychologists that he frequented over the years... never seen this picture before. And finally... we have this.

[Noah points to one of the corners of the paper, showing a small dot of ink.]

[He puts the sheet of paper down.]

Noah: ...a part of a larger piece of paper or something. And that's it. I'll scan all four of these things, and... put it up on my Twitter's twitpic so you can see them in detail for yourself. I'm stumped. For all I know, this... this might not even be from the Observer asshole...

[He holds up the back of the first photo.]

Noah: ...So I'm trying to think here, but, maybe this is what he wants me to think. Whatever. I think it's fucking starting again. That's all I gotta say. Bye for now.

[Noah turns off the camera. The last image of the video is a shot of the Administrator with the words "OF TIME" in the Observer's handwriting.]

The photo/postcard of, possibly, Liam, or even a young Milo Asher 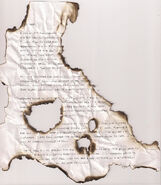 The last frame of the video, finishing the sentence "IT IS ONLY A MATTER OF TIME"

Community content is available under CC-BY-SA unless otherwise noted.
Advertisement